Crowd chants “lock him up!” at President Trump during Game 5 of World Series 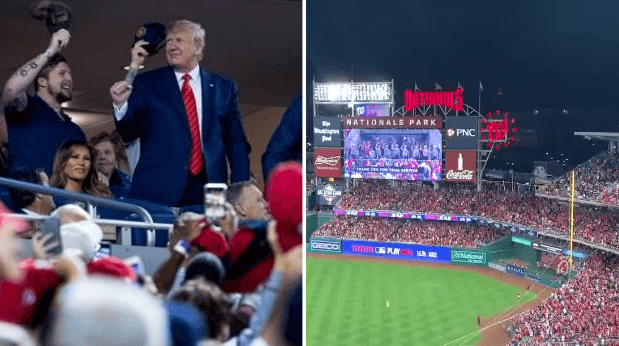 Donald Trump was booed at Game 5 of the World Series between the Houston Astros and Washington Nationals when he was spot on the in-stadium video screen at Nationals Park.

The United States President Donald Trump was welcomed with a chorus of “boos,” followed by chants of “Lock him up!” in a clear nod to impeachment proceedings, as well as his past campaign rallies against Hillary Clinton.

He reportedly arrived after the match had begun to reduce disruptions. “His view was that to make the fan experience as positive as possible,” Major League Baseball Commissioner, Rob Manfred, spoke to a group of journalists on Saturday, according to Politico. “He would arrive at Game 5 sometime after the game began so it wouldn’t interfere with fans getting into the stadium.”

Trump was introduced to the people just before the start of the fourth inning when the people started booing him.

Check out the video below